Variscite’s i.MX8-based System on Module Solutions: How to choose the right SoM for your needs?

The i.MX 8 family includes a wide range of processors such as i.MX 8M, 8M-MINI, 8M-NANO, 8M-PLUS, 8X, and 8QuadMax / QuadPlus. This product family is going to lead the next processors’ generation for the embedded market in the coming years. Variscite’s goal is to provide a wide range of Pin2Pin compatible SOMs based on various i.MX 8 processors, allowing its customers to optimize cost and performance, custom-tailored to specific needs. Variscite offers two Pin2Pin families: the DART form factor with three 90 pins board2board connectors and the VAR-SOM form factor with 200 pin SO-DIMM edge connector.

Many embedded products have strict size constraints. DART’s SoM family measuring only 55mm x 30mm is a perfect fit for such designs. The DART Pin2Pin family offers three different processor options: DART-MX8M based on i.MX 8M, DART-MX8M-MINI with the i.MX 8M Mini, and the latest DART-MX8M-PLUS featuring the i.MX 8M Plus processor. While the NXP processors are not Pin2Pin compatible, the DART product family offers Pin2Pin compatibility, allowing customers to use various processors on the same carrier board without changing its design. This also enables upscaling and extending the product life cycle. Every new Pin2Pin family member carries up to 15 years of longevity from the day the product is launched.

The various DART i.MX 8M based modules offer scalability that enables cost and performance optimization. While the DART-MX8M has a 4K Decode engine and dual CSI camera inputs, it lacks a video encode engine. It was designed on a less power-efficient silicon process than the other options in the DART Pin2Pin family. The DART-MX8M-MINI is the most cost-effective of the three; along with the video encode engine, it offers an excellent option for customers who need a single CSI camera input, up to one DSI/LVDS display, and can manage with USB2. The latest DART-MX8M-PLUS is the most feature-reach of the three, with dual CSI camera inputs, several display options, dual GbE, USB3, and an additional Machine Learning/Artificial Intelligence engine.

The DART i.MX 8M based SOMs feature a variety of LP-DDR4 memory sizes and eMMC storage capacities, optional audio codec, and certified dual-band WiFi and BT/BLE options. Beyond the size aspect, the DART product family with its 270 pins offers customers more I/O options compared to the 200 pins of the VAR-SOM. This means that less muxing is required, and more I/O interfaces are available at the same time.

Variscite's VAR-SOM product family, based on a SODIMM 200 pins edge connector, offers the widest range of Pin2Pin scalable SoM solutions available on the market. It starts with the VAR-SOM-6UL based on entry-level i.MX 6UL/6ULL single Cortex A7 processor and moves up to the VAR-SOM-SOLO/DUAL and VAR-SOM-MX6 based on i.MX 6 single/dual/quad Cortex A9. This family is now extended with the latest NXP i.MX 8 processors, including the i.MX 8M-Nano, 8M-Mini, 8X, 8QuadMax/QuadPlus, and the newest i.MX 8M-Plus.

Leveraging the latest NXP’s series 8 processors, Variscite’s VAR-SOM i.MX8-based SOMs enhanced their CPU performance range from a single core Cortex A53 in the VAR-SOM-MX8M-NANO to a 6 core CPU (dual Cortex A72 plus quad Cortex A53) in the VAR-SOM-MX8. All SOMs also integrate an additional Cortex M4/M7 co-processor for asymmetric multiprocessing applications, such as real-time data acquisition, combined with the latest Linux or Android operating system running the Cortex-A cores.

The VAR-SOM-MX8M-MINI and the VAR-SOM-MX8M-NANO are the most cost-effective solutions, featuring single, dual, and quad Cortex A53, a variety of interfaces, and scalability to meet most of the requirements in the embedded market.

The cost-optimized VAR-SOM-MX8M-NANO is the best option for applications requiring high CPU and graphic performance with wide connectivity, all packaged in a power-efficient solution.

The VAR-SOM-MX8M-MINI is a cost-effective SoM with more CPU performance, double the memory BW, and additional integrated video encode and decode engines. To stress the memory BW difference, the i.MX 8M Nano only supports 16bit memory bus width, while the i.MX 8M Mini supports a 32bits memory bus. Thus, higher CPU to memory performance is achieved with the Mini as well as support for higher memory capacities, leveraging the fact that it utilizes two memory chips instead of one in the Nano.

The VAR-SOM-MX8M-PLUS, based on NXP’s i.MX 8M Plus processor is the latest addition to the VAR-SOM product family, taking this family's scalability to the next level. The SoM includes AI/ML neural processing unit, extra interfaces such as dual GbE, HDMI, dual CSI, and dual CAN bus.

Completing the VAR-SOM Pin2Pin family, the VAR-SOM-MX8X and VAR-SOM-MX8 QuadMax / QuadPlus support more niche markets that require either specific features such as Cortex A35 low power ARM cores in the i.MX 8X, or very high CPU/GPU performance as offered by the i.MX 8QuadMax with 6 cores and the strongest graphic and video processing units. 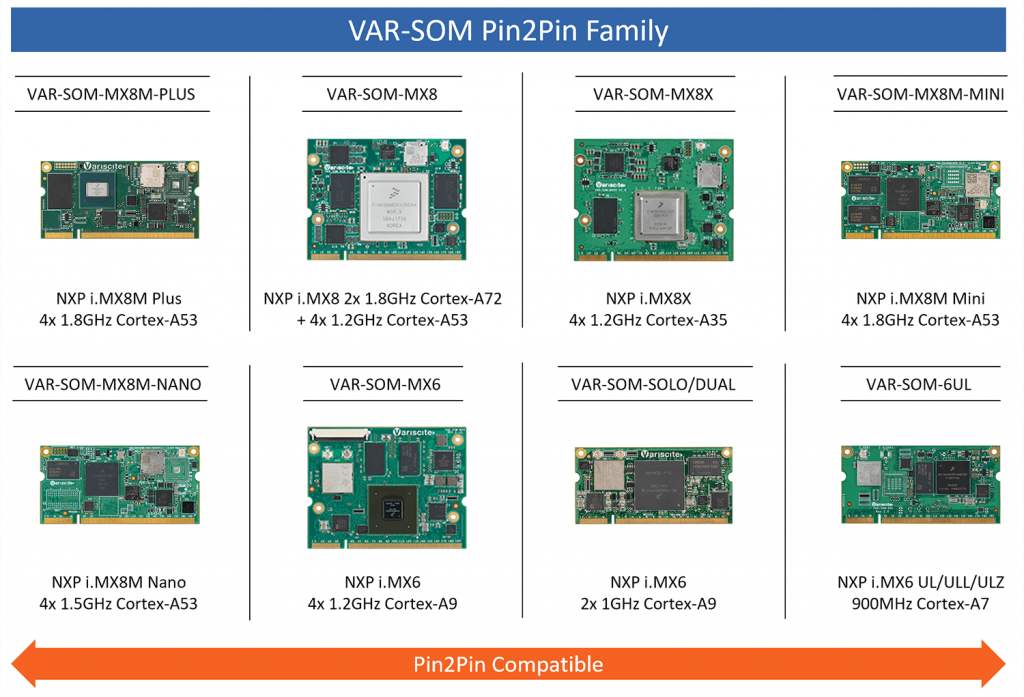 VAR-DT8MCustomBoard: One solution for all DART System on Modules family

The DART-MX8M, DART-MX8M-MINI, and DART-MX8M-PLUS System on Modules feature a large variety of user and debug interfaces, enabling it to serve both as a complete development kit and as a reference design platform.

Both schematic and layout OrCAD formats are provided to the customer as reference documents for his carrier board design. They include design guides, design constraints, a complete software development kit, and more, optimizing product development and shortening its time-to-market.

Symphony Board: One solution for all Variscite VAR-SOM System on Modules family

Similar to the VAR-DT8MCustomBoard for the DART family SOMs, the Symphony board serves as the reference carrier board for the VAR-SOM i.MX8 SOMs.

All related software and design files, as detailed for the VAR-DT8MCustomBoard, are provided to the customer to facilitate the evaluation and design of his own end product.

This is an important tool in the embedded product development process, delivered for both the VAR-SOM and DART Pin2Pin families. It offers the option to re-configure almost every socket pin using many different muxing options, from GPIO function to commonly used communication interfaces, displays, and A/V options. Variscite’s SOMs are carefully designed to utilize as many interface options as possible of the various NXP processor's pin mux capabilities while maintaining maximum pinout compatibility among the various SoM solutions in the same Pin2Pin product family. This approach allows customers to easily design their own custom carrier board while maintaining the scalability option of using different SoM solutions from the corresponding Pin2Pin compatible family.

Accept and hide this message